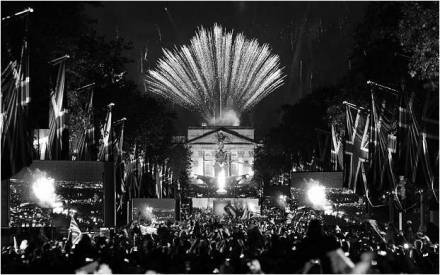 In this article, Alastair Stewart looks at the role of Queen Elizabeth II and the place of Britain in the modern world.  As many have looked to the decline in ‘red’ regions of map as the simple narrative for defining the trajectory of Britain, it can be argued that recent resurgence of the royalty has enabled it to construct a soft power empire.  Where can real influence be found today, in the distrusted pageantry of politics or in the hysterical reactions to an overt display of grandeur?

Of all the transformations to have taken place during her sixty-year reign, none can be more apparent to Queen Elizabeth II than the transformation of Britain’s role in the world. But is the story of decline, and fall, of the British Empire as unassuming as it seems?

When Edward Gibbon concluded of the Roman Empire’s decline that there is ‘nothing more averse to nature and reason than to hold in obedience remote countries and foreign nations, in opposition to their inclination and interest’, he may well have been eulogising the British Empire with hindsight.

While 21st century military capabilities and the red coloured map are modest compared to their apogee at the time of the Queen’s birth, and even at the time of her ascension to the throne, what of that unquantifiable, oft forgotten, measure of power – prestige? A statesman who dares invoke such a criterion is usually called pretentious, at worst criminally ignorant of power politics, in a nuclear age.

The international relations scholar Hans Morgenthau contended that such anthropomorphic qualities are anachronistic and belong to an age of diplomacy where relations among nations were conducted by kings and queens more often than not related. Qualities like prestige, honour and notions of fair play were personal engagements, not like the secular, rational calculations of national interest that the French Revolution ushered in that we know today.

Nevertheless prestige, more often than not subconsciously, is key to how the British see the world and – for good and ill – how the world sees us. Nowhere is this particular quality greater manifest than in the symbol of the Queen.

Yet despite the confirmation of this by the international enthusiasm expressed for the Queen’s Diamond Jubilee, for the wedding of the Duke and Duchess of Cambridge and all things ‘Royal’, there is the forgotten oversight of this being an institution that was the centrepiece and symbol of an empire considered taboo to defend or justify.

Jeremy Paxman recently argued that there is a collective British amnesia about the British imperial experience induced by a fear that the future can never measure up to past triumphs and glory. But is this amnesia exclusively British, or is it global?

The supreme irony, and the great accomplishment, of the Queen at her Diamond Jubilee is the rehabilitation of the legacy of Monarchy that has done more for our status among nations than the imperial architects could have ever dreamed. Gibbon was quite correct in this respect: to impose a value system by control is ineffectual and self-defeating when held in sharp relief to the global respect and affection that the British Monarchy has garnered by its own efforts.

This result however is a credit to the Queen as protector of continuity than the Queen as innovator of international diplomacy. Born in 1926, she came of age at a time when the relations between Dominion countries were an equal, multilateral affair. The experience of the First War World, and the subsequent decision by Lloyd George to allow Dominion nations to sign the Treaty of Versailles individually, confirmed the national identity of each Dominion in the British Empire. This precedent was confirmed in 1931 with the Statue of Westminster, which did not so much elevate other nations as demote the United Kingdom as elder son to being ‘but just another of the children’.

The uniting factor that was to hold this empire of equals in the place was the mutual devotion to the Monarchy. It is often overlooked that this arrangement was in effect at the instigation of the Second World War, with no Dominion having an obligatory commitment to Britain’s war effort and with each holding the power to decline participation in defending the Mother Country, as was the decision of the Irish Free State (a Dominion until 1949).

The Queen therefore was not the last Imperial Monarch; that title belongs to her Grandfather, George V. She was the first to ascend the throne with attitudes informed by a specific transformation of Britain’s Empire into a society of states with family and cultural ties centred on the Monarchy. Britain, long before its alleged decline, opted to agree to the self-governing rights of Dominion nations.

It is more accurate therefore to consider specific instances of Britain trying to maintain control, such as Churchill and the Mau Mau rebellion and Eden with the Suez crisis, as an anachronistic misnomer between the continuity of Attlee and Macmillan as continuing Britain’s new multilateral role established before the Second World War. The inference of this is political withdrawal as leader of empire before 1945 that long preceded the military decline that started after 1945. This fact necessities a reappraisal of the label of ‘decline’ when considering the totality of the UK’s Dominion/international experience in the 20th century.

While history denotes its decline after the Second World War, Britain’s transformation into a position more akin to its present role in the world today was well under way before 1945. While even these cultural ties have been severed or reduced, much is similar now as to then in how prestige and its representation by the Queen still serve an identical purpose in making Britain – as an ancient, proud but powerful nation – unique and centre of a world of many nations. The parallels of this can be seen in the title of ‘leader of the free world’ espoused repeatedly by a succession of U.S Presidents.

The Diamond Jubilee is not then just a celebration of the Queen as a symbol of Britain to the British. It is a reminder that for the last 100 years specifically the Monarchy has been the symbol and centre of countries rallying around Britain.  The original cultural, and indeed emotional ties, have faded but they have also evolved into new ones, most recently and powerfully seen with the Queen’s reconciliatory trip to the Republic of Ireland. The Queen remains an apolitical symbol of something British that can inspire other nations like no political leader. The irony of empire is one can have a greater influence, and possibly more, with apolitical sentiment than conquest. What then is the difference between the UK as ‘fallen power’ and the UK as centre of empire?

One thought on “The Irony of Empire: Why the Diamond Jubilee is the Triumph of Britain without Empire”